The state’s taxpaying citizens can be forgiven for expecting that their tax bills will not go up each year by more than two percent. The rhetoric used by elected officials in the run-up to passage of the bill in 2011, which was echoed repeatedly in the media, was clearly intended to leave that impression. However, a strict two-percent cap on property taxes is not at all what the law requires, nor is it even within the authority of a school district alone. A more precise term is “tax levy limit”.

The basic principle sounds simple: School districts may not adopt a budget that requires a tax levy that exceeds the prior year's levy by more than two percent or the rate of inflation, whichever is less, unless the voters approve the budget by a super-majority of 60%. However, there are two major factors that make the two percent limit not nearly as simple as it’s been advertised to be:

1. Adjustments and exclusions can raise the limit above two percent. Schools have been given a complex formula to determine their actual tax levy limit. The limit is different for every school district in the state, and different from one year to the next. The tax levy limit can also be less than two percent.

2. Even if the limit were exactly two percent, not all taxpayers would see the same impact on their property taxes. The reason is that there is no simple relationship between the tax levy and a homeowner’s tax bill.

Let’s look at these two factors in detail.

The formula that school districts are mandated to use to determine their tax levy limit looks like this: 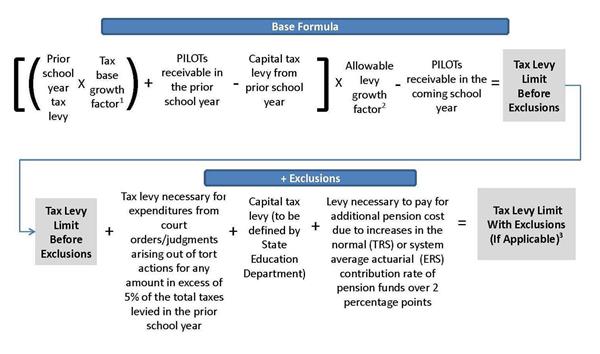 Needless to say, it would be a bit difficult to explain everything in this formula without writing an instruction manual. Indeed, even the instructions provided to school officials by the state itself are less than fully illuminating. In broad outline, the tax levy limit for the upcoming school year is determined by first adjusting the current year’s tax levy (to account for changes in the tax base, receipt of payments in lieu of taxes [PILOTs], and the local share of capital expenditures. Then, the limit for next year is determined by calculating allowable exclusions (the local share of capital expenses, certain legal expenses, and mandated payments to the state retirement systems above a certain threshold).

After figuring out all of these adjustments and exclusions, Roslyn’s tax levy limit has been different every year since the law came into effect, ranging from as low as 0.6 percent in 2016-17 to as high as 3.58 percent in 2020-21 . This illustrates how a different combination of adjustments and exclusions results in a different limit every year. Some school districts have had tax levy limits much higher than two percent, and others much lower. Furthermore, school districts may exceed the limit if the school budget is approved by a super-majority (60%) of voters.

Here is the history in Roslyn over the first seven years of the levy limit:

As you can see, there is indeed a limit, but figuring out exactly what it is not a simple matter. And, most important of all, it is not two percent.

Individual property taxes are determined by this equation:

The school district does not directly control any of the numbers in this equation. The Board of Education has authority only over the tax levy, which is just one among several factors that determine a homeowner’s tax bill. The tax levy is the total amount of property taxes raised (or "levied") annually by the Board of Education. Once the tax levy is set in August of each year, it cannot be changed. That is the sum total of the district’s involvement in the property tax equation.

The two most important factors in determining a tax bill are under the direct control of the Nassau County Assessor. These are the adjusted base proportion and assessed value. The tax rate is based directly on these two factors.

The adjusted based proportion distributes the amount of the tax levy that is collected from each of the four classes of property in Nassau County. Homeowners, who comprise the majority of property owners in most school districts, are in Class 1. The county is permitted by law to shift the tax burden among the four property classes every year, and it often does. For example, if Class 1 pays 75 percent of the total tax levy this year, the county could increase Class 1’s share of the tax burden to 77 percent, which will increase the tax burden on homeowners regardless of the amount of the school budget or school tax levy.

Assessed value is the taxable value of a property. In Nassau County, the assessed value of a home is one-quarter of 1 percent of the market value. Market values are determined by the Assessor, and are reviewed periodically. Total assessed valuation for the community can change because of new properties entering the county tax rolls, or because of homeowners' assessment challenges. If a homeowner applies for and receives a reduced assessment, everyone else’s tax rate, and tax bill, will rise accordingly.

Let’s look at what actually happened in Roslyn, using 2012-13 as an example, when the law first came into effect. The change in the tax levy – the one factor controlled by the school district – was 1.76 percent. However, because of changes in the base proportions (the percentage of taxes paid by homeowners increased from 76.7 to 78.1 percent) and a reduction in assessed values of more than eight percent (due to homeowner requests) the median annual taxes paid by a Roslyn homeowner in 2012-13 increased by 5.68 percent, almost four percent more than the tax levy. The school district didn’t change anything, but tax bills were very different from the tax levy, because of these other factors.

Keep in mind that the tax bill increase of 5.68 percent in 2012-13 was the median, which means that half of all homeowners actually saw their taxes rise less than that amount, while half saw their taxes rise more than that amount. In some years, and in some school communities, this difference is often more exaggerated, due to the factors we’ve described and still others that are beyond local control. Reductions in state aid, for example, can have an enormous impact on the tax levy by lowering a district’s revenues, even with no change in the school budget.

Whether a district is in a strong fiscal position, like Roslyn, or struggling to balance its budget, like many districts across the state, there is still no direct relationship between the tax levy and actual taxes paid.

Residents can find the assessed valuation of their homes, and other information about their property valuation, at the website of the Nassau County Department of Assessment.

The Roslyn School District has an online, interactive Property Tax Calculator to enable homeowners to determine their actual school taxes.