The restoration of the statue, a familiar symbol to generations of Roslyn students and residents, has been completed and placed on a newly built pedestal in the circle in front of the high school's main entrance. Sculpted more than 100 years ago for the Mackay estate, known as Harbor Hill, and copied from an 18th-century French statue, the Horse Tamer is one of a pair of life-size sculptures depicting a man reining in a horse, an artistic theme that traces its lineage to antiquity. The other Horse Tamer was restored a few years ago and now resides in Roslyn's Gerry Park.

The sunny summer afternoon when the statue was delivered back to Roslyn this week stands in dramatic contrast to the cold winter morning in 2012 when, in a seriously deteriorated state, it was removed for safe keeping. When the statue came into the possession of the school district in 1959, it had already stood on the Mackay Estate for nearly 40 years, by which time the estate had long since been lost by the family and was in the process of being demolished. Local artist George Gách found it broken on the ground, already knocked off its original pedestal. He persuaded the school board to accept it so it could be preserved for posterity, and he arranged to have it moved to the circle by the high school's main entrance and put it back together. Gách undertook additional repairs in later years, as further exposure to the elements and vandalism took an additional toll on the marble statue. The district placed it in storage in 2012 to prevent any further damage and eliminate any potential hazard.

The rest, as they say, is history. A group of alumni and residents mounted a multi-year campaign to raise funds for the restoration, and received many private donations. Grants were eventually secured from the Gerry Trust and Nassau County, which had also helped to fund the earlier restoration of the other Horse Tamer. The restoration itself took more than a year and entailed the repair of numerous cracks and other damage. In addition, several missing pieces were sculpted anew, including the tamer's head, the horse's hooves, and parts of the bridle, main, and horse's body. The school district undertook the site work necessary to provide a solid foundation for the restored statue, which weighs many tons.

The Horse Tamer's historical value to the community lies in its connection to the Mackay family and the story of Roslyn' public schools. Katherine Mackay served on the school board in the first decade of the last century, and was its first female trustee. In the 1920s, Clarence Mackay donated a parcel of land for the construction of a new high school. After the Village School burned in 1927, a new high school was built on this land, facing Roslyn Road between Round Hill Road and Harbor Hill Road. A few years after the school was greatly expanded in the 1950s, the Horse Tamer found a new home, fittingly, on the very property that had been the gift of the Mackays.

Commemorative bricks are still for sale in support of the restoration; click here for an order form. 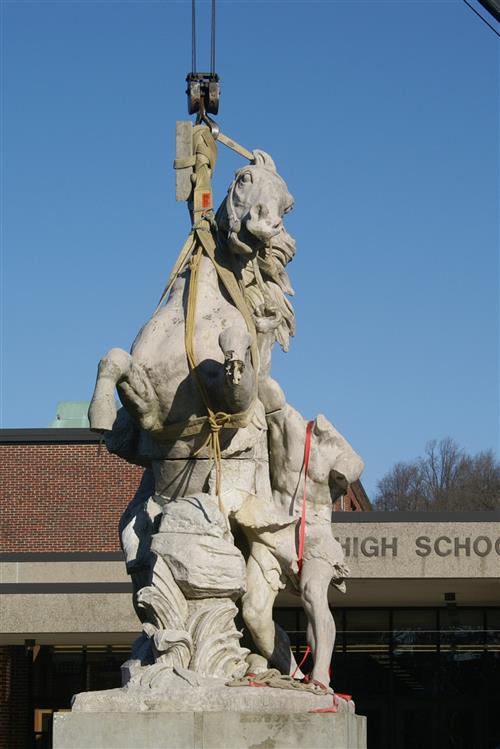 (left) The Horse Tamer removed from the front of Roslyn High School in February 2012, and (right) returned to the circle on Thursday, August 19, 2019.