The Roslyn School District's fiscal health has been given another vote of confidence by the office of the New York State Comptroller (OSC). According to a report just released by the OSC, Roslyn continues to have no designation of fiscal stress whatsoever, and in fact has one of the lowest indicators of fiscal stress among the state's school districts.

The report is the fourth annual scoring of school districts by the Fiscal Stress Monitoring System (FSMS), which was created by the OSC to assess fiscal stress in local governments and school districts. Any score below 25 percent is considered "no designation", meaning the district is not even "susceptible" to fiscal stress in the opinion of the Comptroller. For the 2015-16 fiscal year, Roslyn scored 6.7 percent for the second straight year. The score takes into account the district's budget management, fund balances and debt. 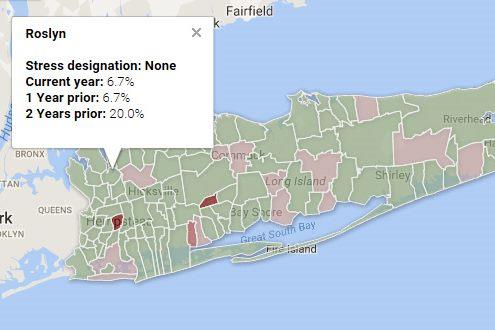 stress have decreased overall across the state, with three times as many districts moving to a lower stress category than to a higher one. The Long Island region has a higher percentage of school districts under stress than in most of the state. However, only a small number of districts statewide were found to have experienced stress across all four years of FSMS reports. Roslyn's stress indicators have steadily decreased, demonstrating that a strong fiscal position has grown even stronger over time.

This report comes only a few months after the Comptroller issued a highly favorable audit of the Roslyn School District, following the first comprehensive state review of the district's finances in more than a decade. The district also received an excellent bond rating last fall, another indicator of its strong fiscal condition. Lower rates mean lower costs for borrowing and savings for taxpayers. The bond rating has had an immediate positive effect, as the district was able to issue capital construction bonds at a much lower rate of interest than originally projected.

More information about the Fiscal Stress Monitoring System is available on the OSC website:
http://www.osc.state.ny.us/press/releases/jan17/012517.htm