SEPT 22, 2016 – The Roslyn Public Schools has received three pieces of excellent news about its financial health, all of which will benefit the district’s taxpayers.

First, the district has been assigned a rating of Aa1 by Moody's Investors Services for the $24.5 million in serial bonds it is issuing to finance the district-wide capital improvement program that is currently under way. The high rating will lower the cost of borrowing for the district.

Moody's cited Roslyn's healthy fiscal situation: "The Aa1 rating incorporates the district's sizeable and wealthy tax base, strong financial position marked by healthy reserves and liquidity, and low debt burden." The Aa1 is the second-highest rating a school district can be assigned; only one-half of one percent of the nation's school districts have a rating higher than Aa1. (Read the rating action by clicking here)

Second, the district anticipates paying only 2 percent in interest on its upcoming bond offering. The original estimate for interest rates was 4.5 percent when voters gave their approval for the bond referendum two years ago.  The actual rate Roslyn will pay is 2.017%.  Over the 15-year life of the bond, the district will pay just under $4 million in interest, less than half of the $9 million that was projected in 2014. This represents a savings to taxpayers of about $5 million over the life of the bond. 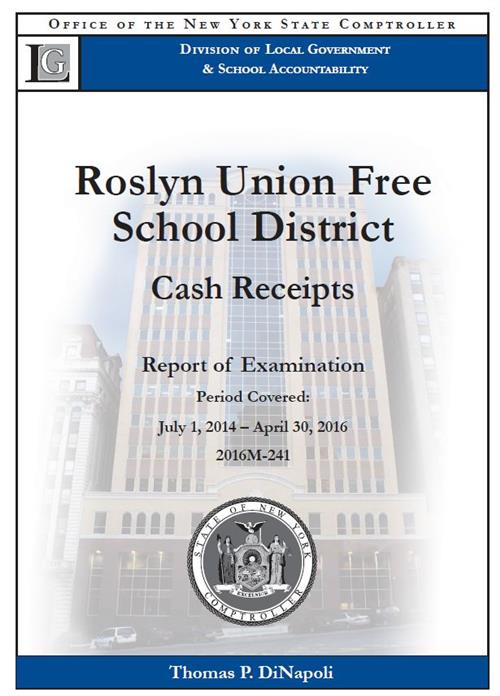 Finally, Roslyn's strong financial position was further confirmed in a recently completed audit by the office of New York State Comptroller Thomas P. Napoli. It was the first state audit undertaken in Roslyn since 2004. The only aspect of the district's entire financial operation that is mentioned in the Comptroller’s audit report concerns cash receipts. The report acknowledges that “district officials have put controls in place to ensure that money is collected, recorded and deposited properly", and goes on to list minor recommendations to improve the handling and timing of cash receipts in all school buildings. (Read the audit report by clicking here)

In its official response to the auditor's report, which was publicly released earlier this month, the Board of Education writes, "The Roslyn Union Free School District is grateful for the thoughtful and comprehensive review of our financial practices, systems and controls which was conducted over the past several months" by the staff of the  Comptroller's office. "Your report affirms the extensive efforts made by the Board of Education over the past 10 years in restoring the faith of our community in the integrity of our financial system, the protection of taxpayers’ dollars, and the successful exercise of our fiduciary responsibilities."  The Board's response also notes that it has already implemented changes to address the one item cited in the report.

The Board of Education additionally praised the work of the district's Business Office, led since 2006 by Assistant Superintendent for Business Joseph C. Dragone, and the members of the Citizens Advisory Audit Committee, a group of local residents who have worked tirelessly with the Board of Education and Administration over many years to oversee every facet of the district's business operations.

Board President Meryl Ben-Levy added, "Among those many people who steadfastly helped the district recover its financial health and reputation, first and foremost is Cliff Saffron. For more than a decade he has been a Board trustee, including many years as our Vice President, and as Chairman of the Citizen's Audit Advisory Committee, of which Board Trustees Steven Litvak and David Dubner are also active contributing members. Cliff Saffron above all others has brought his leadership, integrity, financial expertise, foresight and affection for our school community and our children to the stewardship of the district's finances. Cliff has played an essential role in regaining the public's trust, and we would not be in the very strong fiscal position we are in today without him.”