With beaming smiles, the fifth-graders entered the auditorium to Pomp and Circumstance. Roslyn Board of Education President Meryl Waxman Ben-Levy gave remarks at both ceremonies, which were attended by Superintendent Allison Brown and Assistant Superintendent for Elementary Education Karina Baez. Roslyn Middle School Principal Craig Johanson was also on hand to congratulate the fifth graders and tell them he was looking forward to seeing them in the fall.

Principal Michelle Hazen and Assistant Principal Justin Gabrus hosted the Harbor Hill celebration, which began at 9AM. Students took turns sharing favorite memories of the school before being presented with their promotion certificates. PFA Co-President Amy Zuflacht took the mic to congratulate the students on their achievement. The ceremony culminated with the singing of several songs, first by the fifth grade teachers, then the entire fifth grade.

Principal Sherry Ma and Assistant Principal Nichole Lewis presided over the East Hills ceremony, which began at 11:30AM. PFA Co-Presidents Catherine Ptarcinski and Shuli Lubin gave remarks, followed by the singing of several songs, including “The East Hills Song” before students were presented with their promotion certificates. 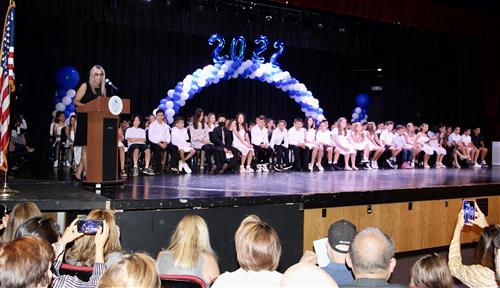 Click here for pictures from the Harbor Hill Ceremony

Click here for pictures from the East Hills Ceremony