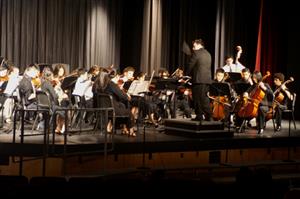 as the high school hosted its winter concerts, the first events held in the newly renovated facility.

The refurbishment of the auditorium included new lighting and sound systems, extensive stage and backstage enhancements, new stage curtains and carpeting, refinishing of the wood panelling, a new roof and, perhaps the most noticeable difference, the restoration and reupholstering of the seats, which had been in a state of advanced disrepair. (Originally made for the Roxy Theater in New York City which closed in 1960, and incorporated into the design of the auditorium when it was first built in the late 1960s, the seats have now been artfully restored.)

Pictured here are the high School's String Orchestra led by

Michael Coffey, the Chorus led by Brad Frey, and the Wind Ensemble led by Pat Patterson.

The Roslyn Middle School's Winter Concerts are scheduled to be held in the high school auditorium on January 29 and 30. 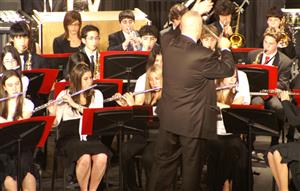 The extensive renovation of the auditorium was part of a $5 million dollar capital plan approved by Roslyn voters in 2005. The funding for that plan came from excess budget funds uncovered in the wake of the financial scandal.  Additional capital expenditures of $4.1 million were approved by voters in 2006, with those projects being funded by recovered funds in the various civil and criminal cases against the guilty parties in the embezzlement case. Therefore, there was no additional property tax increase for any of these projects. Together, the two capital programs have included district-wide roof renovations, plumbing and masonry upgrades, field renovations, blacktop repairs, security and safety system upgrades, technology upgrades, high school science lab additions, and playground upgrades.