JAN 9, 2020 - Amongst the nation’s recently named top young scientists are Roslyn High School seniors William Borges, Andrew Goldberg, and Jake Stoller. Each year, the Regeneron Science Talent Search names 300 Scholars for their work on a research project as well as an extensive application. This year, 36 of those Scholars came from Long Island, and Roslyn is fortunate to have three of them. "I'm extremely proud of these students," said Dr. Allyson Weseley, Roslyn's Coordinator of Secondary Research. “They’re not only hardworking and exceptionally bright, but they truly love science." 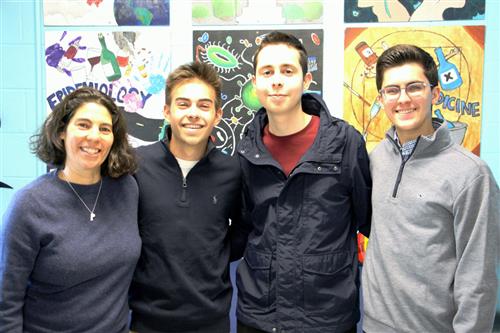 Jake was on a field trip when he got the news. "I was in the middle of making a presentation, and, all of a sudden, my phone started buzzing with text after text congratulating me." His project was focused on creating a more effective treatment option for patients with an aggressive form of cancer called dedifferentiated liposarcoma. He tested a novel combination and method of administration of two pre-existing therapeutic agents on dedifferentiated liposarcoma cells and assessed their effects under various conditions. Jake discovered that the novel combination of drugs, when administered sequentially, was more effective than current methods of treatment. However, Jake explains, "the way in which these two drugs were working together was not how I had suspected. In fact, it still remains unclear exactly how the two are working together. Like so many achievements in science, this potential advance simply revealed another mystery, confirming for me that there will always be so much we don't yet know and so much more to discover."

Will spent the last two summers working on a water purification study at Stony Brook. His project investigated how cellulose from jute could be used to reduce nitrogen water pollution. "When visiting my family in Brazil, I became cognizant of the masses of Brazilians in impoverished areas drinking deadly water polluted with chemical contaminants, including nitrogen. Through local news reports, I also saw the harmful impact of nitrogen water contamination on my immediate Long Island community. My experiences made me realize the harmful impact of nitrogen water pollution and made me want to do something about it." As part of his project, Will used a method called column filtration and found that a small amount of one of his tested materials could remove up to 88% of the nitrogen in wastewater. Ultimately, he hopes that the materials he synthesized can have many practical applications to areas from fish farming to controlling the spread of algal blooms.

The purpose of Andrew's study was to look at differences in brain activity between people with schizophrenia and health controls. He analyzed data collected from over 100 patients and matched controls and found that information was being held on to for less time in the areas of the brain that deal with complex processing in people with schizophrenia than in healthy individuals. "My study provides a mechanistic explanation of the two core symptoms of schizophrenia, delusions and hallucinations, and gives insight into the specific neural underpinnings which underlie an extremely complex and severe disease," explained Andrew.

In two weeks, 40 Finalists will be announced from the group of 300. These 40 students will go to Washington, DC for a week to compete for up to $250,000 in scholarship money.